A selection of the latest news stories and editorials published in Iranian news outlets, compiled by Ali Alfoneh, Ahmad Majidyar and Michael Rubin.

Syrian activists say security forces have attacked rebels in the capital Damascus with helicopters and tanks, while rebels launched an offensive against the government in the northern city of Aleppo.

The activists say government troops used helicopter gunships and tank fire to try to drive rebels out of the Damascus neighborhoods of Barzeh and Mazzeh. Syrian state news agency SANA denied that helicopters were deployed and insisted the capital was “normal” as security forces chased what it called “terrorist” remnants from the streets.

Meanwhile, a rebel commander appeared in an Internet video, announcing that the battle to liberate the commercial hub of Aleppo has begun. Witnesses reported street battles in several districts including Salaheddine and Sakhour.

Elsewhere, Turkish officials said Syrian rebels seized another border crossing between the two countries on Sunday, taking control of the Bab al-Salama complex from Syrian troops. Rebels captured the Syrian side of another crossing (Bab al-Hawa) on the Turkish border last week.

But, Iraqi officials said Syrian insurgents withdrew from the Rabiya border crossing with Iraq overnight, allowing Syrian troops to reclaim it. Rebels remained in control of the Syrian side of the Albu Kamal crossing with Iraq.

Aleppo had been largely untouched by the 16-month uprising against Syrian PresidentBashar al-Assad. It is home to Syrian elites and merchants who have benefited from Mr. Assad’s authoritarian rule, but recently has seen an increase in protests against his deadly crackdown on the rebellion.

Syrian Tribal Networks and their Implications for the Syrian Uprising

By: Carole A. O’Leary, Nicholas A. Heras 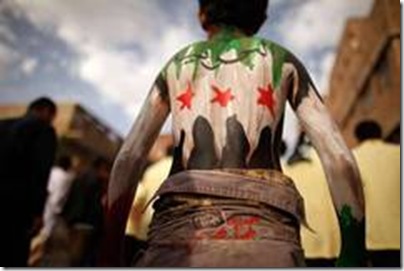 Sunni Arab tribalism has a significant socio-cultural, political, and security impact on the current uprising in Syria, with strong implications for post-Assad governance formation. Tribalism has fueled unrest throughout Syria, including in places such as Dera’a, where mass opposition demonstrations began on March 15, 2011, in the eastern city of Deir al-Zor on the Euphrates River, and in the suburbs of Homs and Damascus, where some of the fiercest combat between the Syrian military and armed opposition groups has occurred. Millions of rural and urban Syrians express an active tribal identity and tribal affiliation is used extensively to mobilize the political and armed opposition against the Assad government as well as to organize paramilitary forces in support of the Syrian regime. Both the Syrian opposition and the Assad government recognize the political importance of the tribal networks that cross Syria and extend into neighboring countries. As a result, the support of Syria’s tribes is a strategic goal for both the Syrian government and the Syrian opposition.

Tribal Networks – The Social Demographic Impact of Tribalism in Syria

The Syrian Ba’ath Party has traditionally sought to undermine the independence of the country’s tribes through intimidation, infiltration, and dependence. These aggressive policies continued under the Assad government and were exacerbated by decades of economic stagnation and the near total collapse of the rural economy of regions in southern and eastern Syria due to drought, corrupt use of water resources and mismanagement of croplands where many tribesmen resided (Jadaliyya, February 16). In spite of these severe difficulties, tribal networks in Syria are, ironically, better equipped at present to influence the opposition against the Assad government than at any other point in Syria’s modern history.

Over the last several decades, relationships between different tribes have been strengthened by the mutual difficulties that all Syrian tribesmen face, and by a shared bond of kinship and a common Arab-Bedouin heritage that differentiates tribesmen from the ruling Assad family that usurped the power of the Syrian Ba’ath Party. [1] The economic disaster facing tribal youth, combined with the political pressure that is constantly applied by the Assad government, caused Syrian tribes to look to each other for mutual help and support. The traditional vertical authority of the shaykhs over the rest of their tribesmen weakened over time, causing decision-making authority to extend beyond one person (or family) in a specific tribal lineage to mutually supporting individuals in a wider network of tribes. [2] Under coercion from the state, many tribal shaykhs were forced to leave their traditional areas to live quietly in Damascus or Aleppo, or left Syria entirely, becoming remote figures from the perspective of their tribesmen. Without revenues, they became unable to provide for the essential needs of their tribes, particularly during the most recent drought that began in 2003 and lasted through the rest of the decade.

END_OF_DOCUMENT_TOKEN_TO_BE_REPLACED

(Reuters) – Arab League monitors head to more cities in Syria on Thursday, including Hama which has a particular resonance to Syrians opposed to President Bashar al Assad‘s rule.

Here are some details about the city, the site of a bloody massacre in 1982:

— In the late 1970s and early 1980s, Syria’s Muslim Brotherhood sought to destabilize and unseat President Hafez al-Assad and his government through political assassinations and urban guerilla warfare. In February 1982, the Muslim Brotherhood ambushed government forces searching for dissidents in Hama.

— Syrian government forces attacked the city, razing the old quarters of Hama to crush the armed uprising by Brotherhood fighters who had taken refuge there.

— Estimates of the death toll in the three weeks of operations in Hama vary from 10,000 to more than 30,000 out of a population of 350,000. Syria then imprisoned much of the membership of the local Islamist group.

— Syrian human rights groups said women, children and the elderly were among those killed in the crackdown and thousands were forced to flee the city.

— Nearly 30 years on Hama demonstrators demanding Assad’s overthrow still revile the memory of his father, who died in 2000 after ruling Syria for three decades.

— In June, activists said Syrian forces killed at least 60 protesters in the city. Residents said security forces and snipers had fired on crowds of demonstrators. END_OF_DOCUMENT_TOKEN_TO_BE_REPLACED

Iran had applied intense pressure to Hamas in an effort to persuade it not to leave Damascus, threatening even to cut off funds to the organization if it did so, Palestinian sources have told Haaretz.

The Iranian pressure also included an unprecedented ultimatum – namely, an explicit threat to stop supplying Hamas with arms and suspend the training of its military activists.

According to the sources, Hamas is abandoning its headquarters in Syria and looking at other Arab states as an alternative location for its political command center. Hamas’ move comes despite intense Iranian pressure on the organization to refrain from relocating.

A Syrian opposition spokesman said recently that once Assad is toppled, his successors will have no intention of preserving the strategic alliance between Damascus, Tehran and Hezbollah.

According to the Palestinian sources, only “second and third-ranking” Hamas activists are leaving Damascus, while senior members of the organization’s political wing, headed by Khaled Meshal, are remaining in the Syrian capital. END_OF_DOCUMENT_TOKEN_TO_BE_REPLACED

Cairo (CNN) — Syria has accepted “in principle” an Arab League plan to permit 500 observers into the country to verify whether the regime has taken measures to protect civilians, a senior Arab diplomat said Friday.

Syria has requested amendments to the protocol before signing it, said the diplomat, who has knowledge of negotiations between the Arab League and Syria.

Arab League nations voted to suspend Syria from membership. But the league, which met in Rabat, Morocco, Wednesday, gave Damascus three days to implement a protocol to allow observers to enter the nation. END_OF_DOCUMENT_TOKEN_TO_BE_REPLACED